Thirty-three project proposals from six countries were submitted in the fund’s latest application round in October 2020. As a result of the evaluation, 15 projects from four countries will receive grants ranging from EUR 30,000 to EUR 200,000. Most of the project proposals were related to agriculture, recycling of nutrients and wastewater treatment, as well as projects to better understand and reduce hazardous substances from the seabed.

“Through the BSAP Fund we can provide financing for a wide variety of applicants representing both the public and private sectors. A good example among the recently selected projects is UAB Ekodrena, a private company from Lithuania aiming to reduce the outflow of nutrients from agriculture using controlled drainage to retain rainfall in fields,” says Dennis Hamro-Drotz, Senior Investment Manager at Nefco.

All the projects are expected to have a direct or indirect positive impact on the environmental status of the Baltic Sea. Hamro-Drotz sees the importance of public-private partnerships. “The idea with the BSAP fund is to provide early-stage funding to demonstrate the effectiveness of new solutions. As a matter of fact, the grants from the fund have unlocked further financing totalling seven times the original investment from the BSAP Fund, speeding up the implementation of certain projects and thus their environmental impacts on the Baltic Sea.”

List of agreed projects* that are ready to take off.
*The list shows already agreed projects from the October funding round which are now ready to start or have already started. 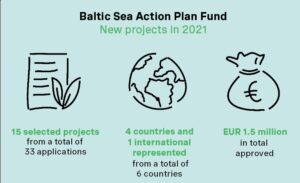 About the Baltic Sea Action Plan

The Baltic Sea Action Plan (BSAP) was adopted by the HELCOM member countries (Denmark, Estonia, Finland, Germany, Latvia, Lithuania, Poland, Russia and Sweden) in 2007, with the aim to restore the good ecological status of the Baltic marine environment by 2021. Currently the plan is under revision, integrating new environmental challenges to keep improving the status of the sea. The BSAP provides a concrete basis for HELCOM’s work. Since the adoption of the plan, the sea has experienced environmental improvements such as a reduction in nutrient inputs, better state of biodiversity and decrease in maritime incidents and spills. The BSAP Fund was set up in 2010 to help speed up the implementation of the BSAP, until now its donors have been from Sweden and Finland, with NIB and Nefco as the Fund managers.