Nefco and Almi Företagspartner finance the Swedish company NOAQ to speed up the internationalisation of flood protection barriers. These climate-adaptation solutions are an efficient and sustainable alternative to sandbags, which require more human and natural resources. NOAQ’s flood protection barriers can provide a solution to floods in urban environments.

Sandbags have historically been used around the world as walls to protect cities from floods. However, this system requires installation time and consumes resources that cannot be replaced quickly. The NOAQ Boxwall, a temporary flood barrier consisting of interconnected bookend-like modules that use the weight of the flood water for anchoring, can provide an efficient alternative.

“I came up with the idea of using water instead of sand to provide the necessary stability. In a flooding event, you have hundreds of thousands of tons of water already delivered to the site by nature,” says Sigurd Melin, founder of the company.

NOAQ Flood Protection AB in Sweden develops, designs and sells these pioneering solutions, which are reusable and can have a lifetime of at least 10 years. NOAQ flood protection barriers are light, easy to transport and efficient to build.

A climate-adaptation solution for floods, urban areas and hazardous substances

Coastal and urban areas face an increasing probability of flooding events due to the rise in sea levels, extreme rainfall and river flow events. In July this summer, NOAQ’s boxwalls were used in Kufstein (Austria) to channel flood water on the streets and lead it past the buildings down to the river, protecting buildings and citizens.

NOAQ’s flood barriers can also be used to protect and catch hazardous liquids, reducing the risk of adverse impacts on people, nature and infrastructure.

NOAQ is growing fast, with distributors in more than 35 countries. The company needs to invest in its R&D to maintain its competitiveness. Nefco’s Green Recovery financing will be used to reach full-scale industrial production of the flood barrier system. With financing from Nefco and the Swedish Regional Development Agency Almi Företagspartner, NOAQ will be able to take its climate adaptation solution to the next level. “We want to create a complete flood fighting system, and with loans from both Nefco and Almi we will be able to speed up this process,” says Ann Blanche-Sahlqvist, co-owner and CFO of the company.

NOAQ Flood Protection AB is a Swedish company located in Näsviken that develops and sells mobile flood protection barriers on the global market. Its main products, the NOAQ Boxwall and the NOAQ Tubewall, consist of self-anchoring barriers stabilised by the weight of the flood water itself. NOAQ’s products are easy to use and quick to deploy, offering the market efficient and sustainable alternatives to conventional flood protection systems like sandbags. 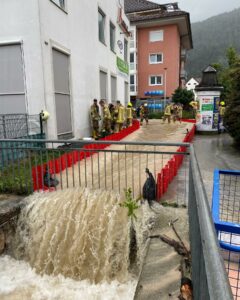