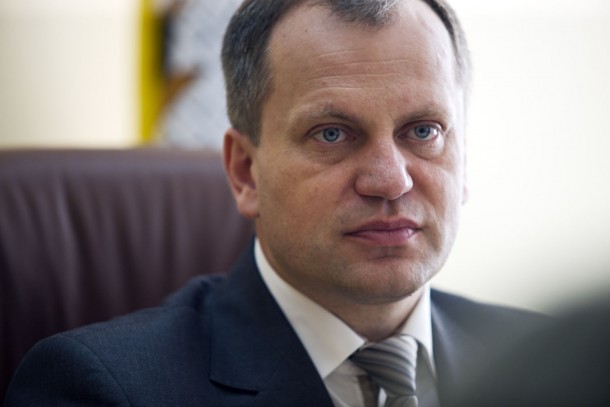 “Thanks for the street lights,” exclaims an elderly lady as we stroll through a residential area in Zhytomyr in Ukraine. Right now, the area is benefiting from a project aimed at upgrading the street lighting and replacing all the out-of-date lights with energy-efficient LED lights.

The old street lights had an average life of about 700 hours. This meant that the city had to waste a large amount of financial and staff resources on replacing the lights at regular intervals, and for the local inhabitants, it meant repeated hassle with dark streets. The new LED lights have an expected life of 15 years and reduce energy consumption by about 80 per cent. The lights for the project have been supplied by the local company City Light Misksvitlo.

In total, 1,665 lights will be replaced in Zhytomyr during the term of the project. When we visit the outskirts of Zhytomyr in October, two teams are working with mobile cranes in the area. The work seems to be progressing well. According to Vladimir Malin, all the lights will be installed within a few weeks.

The investment in upgrading the street lighting is part of a bigger project that comprises a large number of investments in improving energy efficiency in Zhytomyr. Within the frame of the project, the city has also renovated municipal buildings to reduce energy consumption and minimise the costs of heating at, for example, daycare centres and schools. The project is being financed by municipal means and a loan from the NEFCO Facility for Energy Saving Credits.

One of the buildings that has been renovated is the municipality’s biggest day-care centre, number 21, for almost 400 children aged 0-6 years.

“It used to be draughty and cold at the day-care centre in the winter. The mercury sometimes dropped to 14 degrees in the bedrooms and play rooms. With the new windows and new thermostats, we can now regulate the temperature and don’t need to wrap up the children when they’re indoors,” explains the Head of the day-care centre Kateryna Tomaskevska.

The installation of new windows is expected to reduce the heat losses at the day-care centre by approximately 10 per cent. In addition, the project includes insulating the roof and installing new heat exchangers that allow more efficient regulation of the temperature of the hot water. The modernisation of Day-Care Centre 21 has also attracted interest from other day-care centres in the city.

“We are currently processing three similar applications,” confirms Boris Pavholuk who is responsible for coordinating Zhytomyr’s investment in energy-efficiency improvements.

According to the preliminary estimates by the consultancy firm Pöyry SwedPower Ab, the investment in upgrading the street lighting and Day-Care Centre 21 will reduce electricity consumption by some 560 megawatt hours while the consumption of heating will fall by approximately 360 megawatt hours per year. Converted into money, this means that the municipality will save about 721,000 UAH per year from the project.

“We want to be forerunners of the energy efficiency improvements and cooperate with international financial institutions within this sector,” says Zhytomyr’s Mayor, Volodymyr Deboy, when we meet him at the City Hall.

Deboy has been a driving force on energy issues, and his involvement seems to be bearing fruit. The city management is considering plans to modernise Zhytomyr’s district heating network with the help of financial backing from EBRD and NEFCO within the frame of the Eastern Europe Energy Efficiency and Environment Partnership (E5P).

“The steering group for E5P approved Zhytomyr’s project plan in connection with its latest meeting in Kyiv. Now, only the legal details and a tangible agreement remain before we can continue with the project,” says Senior Investment Manager Ulf Bojö at NEFCO.