Waste transformed into energy in Vitebsk 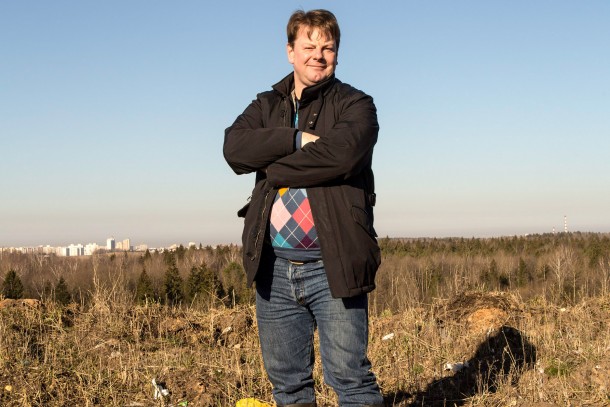 The nauseating stench of rotting food scraps is unmistakable – and the gulls have come to the same conclusion as they swoop around us in large flocks in search of easily-caught food. “One man’s meat is another man’s poison” as the saying goes. We are at the landfill site outside Vitebsk in north east Belarus. Project Manager Jesper Nyqvist from the Swedish company Vireo Energy is showing us round to demonstrate how they produce electricity from rubbish.

Only a few days ago, this same site was flooded by the intense spring rains. That wetness has now turned into a sloppy mud that has to be trampled down by rubber boots – which isn’t really the type of equipment you think to pack in your small cabin baggage. Thankfully Vireo Energy has a few pairs of overflow boots precisely for lending to inappropriately-dressed visitors, thinking they could visit the landfill site in smart shoes and a suit.

“Here you can see the wells where we pump up the methane stored in the depths of this site,” says Jesper, pointing to a number of pipes creating a semi-circle in the furthest section of the landfill site. “We started with several test pumps at five different locations which took around two months. The pumping activity showed that there was plenty of methane and great opportunities to produce electricity,” he adds.

Rotting organic matter and food waste, with its anaerobic oxygen-poor conditions, creates methane, which is a key contributor to climate change. After carbon dioxide, methane has the greatest impact on the greenhouse effect. One kilo of methane has the same impact as 21 kilos of carbon dioxide. A proportionally large share of the global methane emissions occurs at landfill sites. As the methane is dewatered and incinerated and fossil fuel is replaced by electricity from the landfill, climate-changing emissions are reduced. In other words, there are considerable environmental gains for the landfill site in Vitebsk.

Vireo’s biogas reactor in Vitebsk is estimated to produce around 6,000 megawatt hours of electricity per year. The company has the capacity to produce and sell both heat and electricity, but for now they are only selling electricity to the regional electric grid company. “There is a newly-built housing suburb only a few kilometres from the site. You can see the apartment blocks over there on the left, on the road to Orsha,” says Jesper pointing to a cluster of tall roofs. “We could have delivered heating to the apartments in the new area, but at the moment the infrastructure and pipes aren’t in place, and so the local construction companies benefit from relying on imported natural gas instead,” he explains.

The project in Vitebsk is not Vireo’s only achievement in Belarus. The company’s CEO, Robert Domaradzki explains via email that Vireo has successfully completed similar
projects in Orsha and Gomel. Final commissioning of a newly built plant has been done in Novopolotsk to lay the ground for production of renewable energy. All projects have been realised with the help of loan financing from NEFCO. Swedfund has also contributed with financing of Vireo’s operations in Belarus. “According to our calculations, these projects will reduce methane emissions to the order of 32,000 carbon dioxide equivalent units,” says Senior Manager Karl-Johan Lehtinen who runs NEFCO’s environmental department in Helsinki.

Last year, Vireo signed investment contracts for equivalent projects in Grodno, Brest and Mogilev. “In many respects, Belarus is an emerging market for energy companies and firms in the cleantech industry. There is huge potential to increase the share of renewable energy in this country,” says Jesper. “However, the opportunities to extract methane are not unlimited. It is not possible to produce heat and electricity at every single landfill site – there has to be enough rubbish that has been there for decades in the same location. There must be at least 1-2 million tonnes of rubbish in order to create a single megawatt hour of electricity. In reality, this means that this type of business is only profitable when it
is close to larger towns and cities with at least 100,000 inhabitants.”

Despite Vireo’s project, with its efficient and effective methane recovery, waste management at the site in Vitebsk is far from optimal. Persistent organic environmental toxins, paints, electronic scrap, medical waste, entrails from slaughterhouses, furniture, and waste from the construction industry are all collected in the same space at the same landfill site – all in one foul cocktail. A steady stream of lorries and waste disposal trucks drive in and out of this large expanse. Around 300 such trucks visit here every day. Videotapes, computers, keyboards and collapsed sofas simply lie in the corner of the site, next to rusty paint tins and pierced aerosols. The Western culture of disposability has also found a foothold here in Belarus. A stone’s throw from the site is a small gurgling brook; perhaps part of the catchment flow to the Baltic Sea. “It’s essential for people to start sorting rubbish – it would also benefit our business. If there is too much rubbish and industrial waste amongst the organic waste, then the levels of methane are insufficient and so we cannot produce electricity from that,” says Jesper.

But there are rumblings of change in Vitebsk. At the entrance to the site, in a brick building, we can see frantic efforts to sort rubbish. Small business owner Sergey Makarov runs a business dealing with paper, glass, card and plastic. “We sell all polymer plastic to a factory in Novopolotsk. They pay around USD 200 per tonne of plastic that we send to them,” says Sergey. “We also bale up cardboard and send those bales to a paper factory paying around USD 70 per tonne,” he adds.

A tonne of glass will get a million roubles from the local companies, equivalent to around USD 65. Sergey’s tiny company only employs 13 people, most of whom stand at the conveyor belt and sort the rubbish by hand. In one day, they can successfully sort, bale and deliver around 10 tonnes of rubbish for recycling. Their sorting is only small-scale, and the company lacks capital to expand its operations. Sergey tells us about his time spent in Germany, gesticulating wildly, and explains his plans to import German technology to upgrade his recycling operations. Close to this facility is Vireo’s buzzing biogas reactor. The reactor does not take up much space, as it is encased in a blue container in a small space, surrounded by a fence.

“This is a heat exchanger, and over there you can see the equipment where we dewater the methane before it flows to the generator. If there is an oversupply of methane, we can flare off the excess,” explains Jesper as he shows us round.

Vireo Energy has successfully established a presence on the Belarus market. An expansion and internationalisation of the business is already underway. Last year, the company started up an equivalent project in Gatchina, Russia. “We intend to be the leading producer of renewable energy in eastern and central Europe,” says Robert Domaradzki.