Waiting for the rain 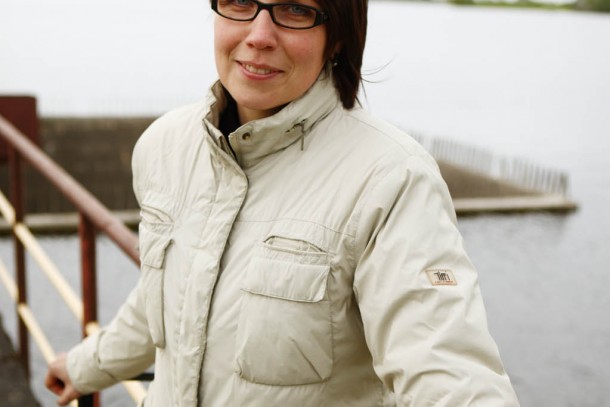 “Why didn’t you bring the rain with you?” the local workers joke when we turn up with Ausra Skaudaite, the Managing Director of UAB Baltic Hydroenergy, to the hydropower plant in Angiriai in southern Lithuania.

It’s not only farmers who wish for downpours in the spring; UAB Baltic Hydroenergy’s business also depends on the weather. But Ausra Skaudaite is no rain maker, despite the fact that as the head of a small power company she is no stranger to rolling up her sleeves to help when she’s touring the field.

The spring is well advanced but despite the relentless drizzle, the water level of the nearby reservoir used by the plant is so low that the plant was shut down when we visited it. In contrast, late winter and early spring saw plenty of rain, guaranteeing floods of water for the company’s power plant.

Last year, the plant’s Swedish-made Turab turbines generated a total of 4 million kilowatt hours of power, satisfying the annual consumption of almost 1300 Lithuanian households. The capacity of the power plant in Angiriai is 1.5 megawatts and it is one of a total of five stations that the company operates in Lithuania. Last year, UAB Baltic Hydroenergy’s total electricity output was 7,13 million kWh. Hydropower accounts for nearly four per cent of Lithuania’s total electricity production and half of that generated by renewable sources.

NEFCO has a 13-per cent holding in the Norwegian parent company Baltic Hydroenergy AS and has been involved in modernizing and upgrading hydropower plants in Lithuania and also in Latvia. NEFCO’s investments mostly involve the installation of new turbines or generators at existing stations. Although there are exceptions, too. For example, previously Angiriai didn’t have a hydroelectric station at all and the local reservoir was used only by local farmers who drained their fields into it. Today, the reservoir is used to generate power for local use.

“In compliance with EU decisions, Lithuania has committed to increasing the use of renewable energy to account for 20 per cent of its total power production. But without a sufficiently high guaranteed price for hydro or wind power, for instance, this will be a challenging goal to attain. Currently we receive 7.5 Eurocents for each kWh of electricity we generate,” says Ausra Skaudaite.

NEFCO will make use of its experience in small-scale hydropower generation in Lithuania and Latvia later this year when it surveys the potential for similar investments in Russia.

“We are financing a preliminary feasibility study into modernizing small hydropower stations in the municipalities of Segezja, Kem and Belomorsk in central Karelia,” says Henrik G. Forsström, special advisor at NEFCO.

Footnote: Small-scale hydropower means power stations with a capacity of no more than 10 MW, in compliance with criteria approved by the EU and the International Union of Producers and Distributors of Electricity.