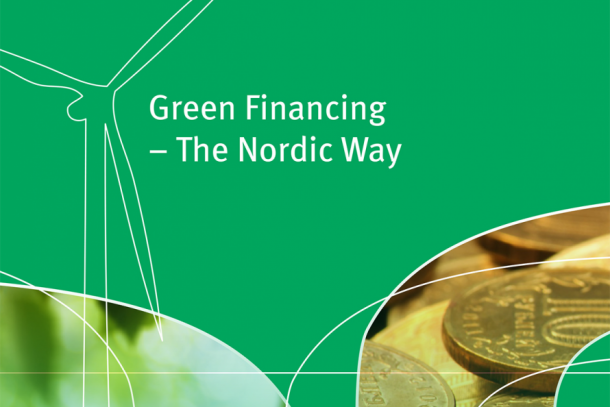 A green transition is not only a necessity, it also generates growth – this was the conclusion of a Nordic report presented to the G20 on 6 September in Shanghai.

Green financing has been a key instrument in the green transition that has been taking place in the Nordic countries over the last forty years.

“Good co-operation between the financial market and the public and private sectors is an important factor in explaining Nordic progress in the green transition,” said Dagfinn Høybråten, Secretary General of the Nordic Council of Ministers.

The report shows that a green transition isn’t achievable at the snap of a finger – it requires a broad approach in many areas, for which green financing is a key factor. Interaction been public and private stakeholders is vital in this context. In addition, the report points to the importance of co-operation between central and local authorities in developing sustainable and green financing solutions. Another important element is that during a transition period, green solutions in the Nordic countries are subsidised before allowing market forces to take over as stable and predictable regulatory framework is developed.

The report also underlines the importance of the interest and willingness of those living in the Nordic Region to help combat environmental and climate threats to the green transition that has taken place. The Nordic Swan ecolabel is a concrete example of how more stringent environmental requirements can be introduced on a voluntary basis with the support of research, innovation, and consumer-conscious behaviour.

The report Green Finance the Nordic Way has been produced to demonstrate successful Nordic examples of green financing to the G20 green financing group. The G20 is an international forum for governments and central banks from the 20 largest economies in the world.