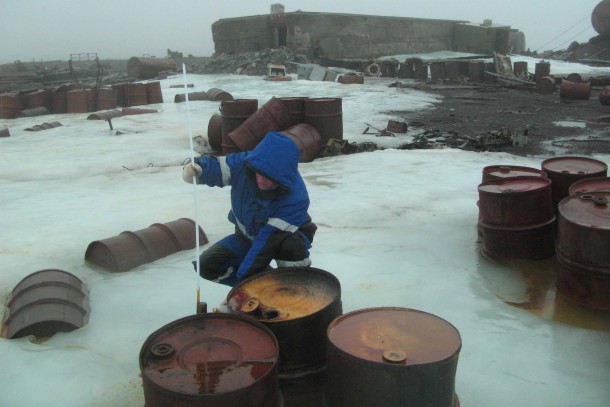 The Russian government has announced that it will spend 740 million RUB to clean up hazardous wastes from Franz Josef Land, an archipelago of 196 islands northwest of Novaya Zemlya, which covers 16, 096 square miles.

Franz Josef Land, which lies in the Russian Arctic region, was used by the Soviet military from the earliest days of the cold war until the early 1990s, and the area is littered with environmentally hazardous wastes and chemicals.

The uninhabited archipelago contains one of the largest polar bear populations in the Arctic region.

In 2007, NEFCO co-financed a Russian expedition that surveyed and assessed the hazardous chemicals and wastes in Franz Josef Land. The work was carried out with the help of helicopters and the polar vessel RV Michail Somov, which served as a base for the research team. The data collected from the survey was fed into a GIS database, which generated the coordinates for the polluted areas. The database, which was partly financed by NEFCO, will play a crucial role in the planned clean-up operations in the archipelago, which are scheduled to begin in 2012.

The money reserved for the clean-up operation by the Russian government will, among other things, be used to dispose about 250 thousand barrels of oil products, which pose a serious ecological hazard to the Arctic environment.

“We are extremely delighted that the Franz Josef Land clean-up project will be realised, and that the Russian government has reserved some funds for this crucial operation, which, we hope, will set a precedent for similar clean-up operations in the Russian Arctic region, says Henrik G Forsström, Senior Adviser at NEFCO.

Through its management of the Barents Hot Spots Facility (BHSF), NEFCO has a pivotal role in promoting environmental operations in the Arctic and the Barents region. The aim of BHSF, which is financed by Finland, Iceland, Norway and Sweden, is to promote project development at so-called environmental “hot spots” in the Russian Barents Region that were identified by NEFCO and the Arctic Monitoring and Assessment Programme (AMAP) in 2003.

At present close to 50 projects and other initiatives have been approved for funding from BHSF, whose current asset value amounts to some EUR 4 million.