Renewable fuels to be used in district heating in Ukraine 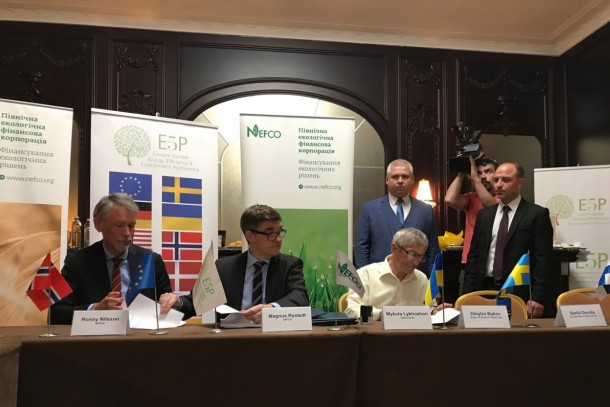 NEFCO and the municipal district heating company Teploenergo in the city of Horishni Plavni in Central Ukraine have today signed a loan agreement aimed at modernising and upgrading the city’s district heating system. The total investment for the project is EUR 8.25 million and it will be financed by NEFCO, E5P, Teploenergo and Sweden. NEFCO will act as implementing agency for the project.

The aim of the project is to introduce renewable fuels and energy-efficiency measures in the district heating system in the city of Horishni Plavni. The existing main production facility will be modernised and upgraded with new biofuel boilers designed to use sunflower husk as the primary fuel. Horishni Plavni is located some 100 km south-west of Poltava and has approx. 52,000 inhabitants.

The annual savings of electricity and gas will be approx. 800 MWh and 7.85 million m3 respectively, and the expected annual CO2 reductions approx. 17,000 tonnes. The installation of biofuel boilers alone is expected to reduce the CO2 emissions by 13,400 tonnes. The modernisation will also contribute with considerable financial savings for the city, with Horishni Plavni expected to save up to EUR 1.5 million annually.

“We address our deep gratitude to all the partners supporting the project and for a fruitful cooperation during the preparation phase. This project provides the gateway for the complete rehabilitation of the central boiler house in the city, including the construction of a new building and the purchase of modern high-quality boiler equipment fully in line with highest energy efficiency standards. The modernisation will not only enable reductions of heat energy losses, but also the financial burden on the residents will be reduced,” commented Mr Dmytry Bykov, Mayor of Horishni Plavni.

NEFCO will provide EUR 5 million in loan financing for the project. In addition, the Eastern Europe Energy Efficiency and Environment Partnership (E5P) will support the project with EUR 1.5 million in grant funding and Teploenergo will invest EUR 1.2 million in the project. Sweden has contributed with EUR 550,000 for the technical assistance of the project, both during preparation and implementation.

“We are delighted to be able to contribute with financing to this pioneering project in district heating together with E5P and to implement a reference project with the city based on best district heating industry practises,” said NEFCO’s Managing Director Magnus Rystedt in connection with the E5P Steering Group meeting in Kiev.

Two new boilers for renewable fuels with a total capacity of approx. 8 MW will be installed. They are expected to provide the base load production all year round. In addition, new gas-fired boilers will be installed to be operated in peak seasons and as a reserve for the biofuel boilers. Furthermore, some 500 metres of the most vulnerable main district heating pipelines will be replaced and a system for remote control and management of the district heating system in real time installed. The E5P grant will be used for the installation of one of the renewable fuel boilers.

Teploenergo is the supplier of centralised heating and hot water in Horishni Plavni and operates four boiler houses. The main boiler plant, established in 1963, supplies 84% of the total heat demand and 90% of all households in the city with heating energy.

Currently, some 7.5 million households in Ukraine are connected to the district heating networks, which accounts for 43% of all households in the country. Of the centralised heat supply, 73% is based on natural gas. However, by introducing and implementing alternative energy sources, the heat production will not only become more sustainable but the security of the supply will also increase. Modernisation of the district heating systems in Ukraine could lead to 40% energy savings.

NEFCO is currently financing the implementation of district heating projects in Ukraine through the DemoUkraina District Heating facility (DemoUkrainaDH). The facility was established together with Sweden in cooperation with the Ministry for Regional Development, Construction, Housing and Municipal Economy of Ukraine to demonstrate modern, energy-efficient district heating technology through the financing of about 20 demonstration projects in different Ukrainian cities. Implementation and preparation activities are currently ongoing for 15 projects, and six projects have been implemented so far through the DemoUkraina DH facility.

The Eastern Europe Energy Efficiency and Environment Partnership (E5P) is a €180 million multi-donor fund managed by the EBRD and designed to promote energy-efficiency investments in Ukraine and other eastern European countries. The fund was established under an initiative of the Swedish government during its presidency of the European Union (EU) in 2009. E5P complements energy-efficiency loans provided by financial institutions including the European Bank for Reconstruction and Development, the European Investment Bank, KfW, NEFCO and the World Bank Group. Contributors to E5P are the EU and the US, as well as Denmark, Estonia, Finland, Germany, Iceland, Ireland, Latvia, Lithuania, Norway, Poland, Slovak Republic, Sweden, Switzerland and Ukraine.