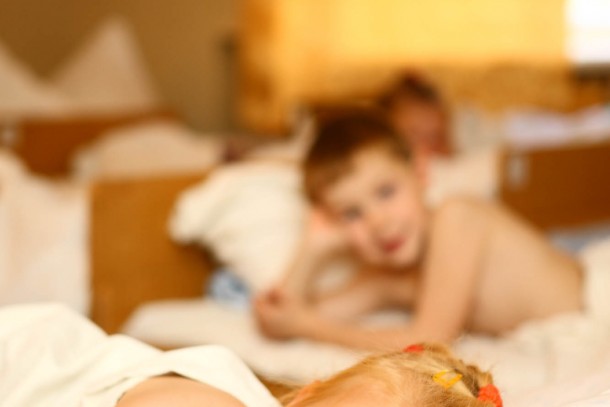 “The children have already gone up for their afternoon nap but if you make it snappy, you’ll have time to take a few photos,” says day-care centre Director Natalya Bykova as she hurries upstairs.

Neatly folded clothes lie on chairs. Added cosiness is provided by pastel colours, cuddly toys and beautiful murals. At the sink the staff is cleaning up after lunch.Naturally, the wide-eyed foreigners carrying tripods and cameras arouse curiosity. Flashlights go off and general merriment prevails. Children giggle delightfully at the opportunity of playing tricks on us. Strangely enough, peace is restored as soon as we leave the room to make a tour of the facility. Down in the basement, the municipality has had a new heat exchanger installed. The technical system was delivered by the Estonian company Eesti Termotehnika while NEFCO funded the project under its facility for energy saving credits.

Over the past few years, Novodvinsk,a town of 42,000, has made a range of investments to improve the energy efficiency of municipally-owned premises. More than 90% of the buildings in the town are connected to the district heating system and the drive to cut down on energy consumption is shared by all members of the town administration. Novodvinsk’s economy is based on the pulp industry – by far the biggest single employer in the region. However, as a result of the current recession, tax revenues are dwindling which means that many foreseen energy projects have been frozen.

“Despite the circumstances we’ve succeeded in completing a couple of projects this year,” says Power Engineer Anna Kulikovskaya of the Archangel Energy Efficiency Center.

Day-care centre no. 15 is not the only facility in Novodvinsk to have benefited from the financing provided by NEFCO. A stone’s throw away stands a 74-year-old school with a total of 333 pupils. This school no. 1 boasts upgraded boilers and heat exchangers, new thermostats and thermally insulated classroom windows. Corridors are lit with low-energy fluorescent tubes.

“We’ve saved around 300,000 roubles per year in heating and electricity costs, meaning that we’re able to pay for the project with two years’ savings,” says Principal Valentina Sivova.

Aside from generating cash revenues, the project has benefited the environment in the form of reduced carbon, sulphur and nitrogen dioxide emissions. The school’s energy consumption has fallen by over 59% and carbon dioxide emissions by 218 tonnes per year.

The pupils in a classroom we pop into on our tour are studying algebra. Environmental awareness is evident in other school activities as well – as seen recently when the school was awarded a prize worth one million roubles by the Ministry of Education in recognition of its achievements in teaching ecology and natural history. Among other things, the prize made it possible to set up an IT class with new computers.

That investments in the environment make sense is nothing new to Principal Svetlana Zadvornaya, Head of the local art school that offers club activities for school children and young people in the afternoons. Over 500 pupils study subjects such as visual arts, dance, choreography, choir singing or take piano lessons at the school. Parents pay for about 20% of the costs – equivalent to a monthly expenditure of 300 to 500 roubles depending
on the subject involved.

“Thanks to the upgrading of the school’s boiler and reduced energy consumption, we’ve been able to make major savings as the energy bills no longer impose such a burden on our finances as in the past. Savings benefit the pupils in many ways. For example, we’ve bought new synthesizers and outsourced cleaning services with the money we’ve saved,” says Zadvornaya.

The art school has evolved into a sort of hub for local residents who long for cultural pursuits. It is not only pupils who spend time in the building. On the ground floor, painter Pavel Leshukov is busy hanging his watercolours and oil paintings for the opening of an exhibition scheduled for the same week.

“I love the wooden houses built in the traditional style with their heavy floorboards and beautiful cut details. I’m lucky that there are many of them here in the Archangel region as they give me energy,” reflects Leshukov.