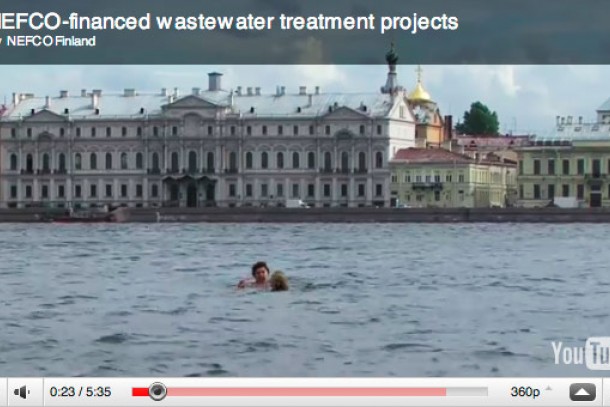 NEFCO has released a video clip on the ecological state of the Baltic Sea and the corporation’s investments in wastewater treatment.

The video clip mainly focuses on NEFCO’s funding operations in Russia, with particular attention on Vodokanal, the waterworks company in St. Petersburg.

“It is fascinating to follow the debate on the Baltic Sea. During the summer season, when the ugly algae blooms hit the beaches and ruin our vacation plans, the poor state of the Baltic Sea is rudely brought to our attention, and we all start talking about it. In winter, when ice and snow covers the pollution, the public debate dies. We hope that this video will keep the debate alive and inspire coordinated efforts to save this particularly sensitive maritime area,” says Mikael Sjövall, NEFCO’s Communications Manager.

“It is my hope that the provision of more information on successful projects to improve the ecological state of the Baltic Sea will generate more public interest for the continuous improvement of this closed sea area”, says Karl-Johan Lehtinen, a Senior Manager at NEFCO.

Since its inception, NEFCO has so far financed 25 renovations of wastewater treatment plants, which has resulted in substantial reductions of environmental pollutants flowing into the Baltic Sea. In 2009, NEFCO-funded projects reduced discharges of phosphorus into the Baltic Sea by some 1,260 tonnes, a figure corresponding to the amount of untreated wastewater generated by over 1.8 million people every year.