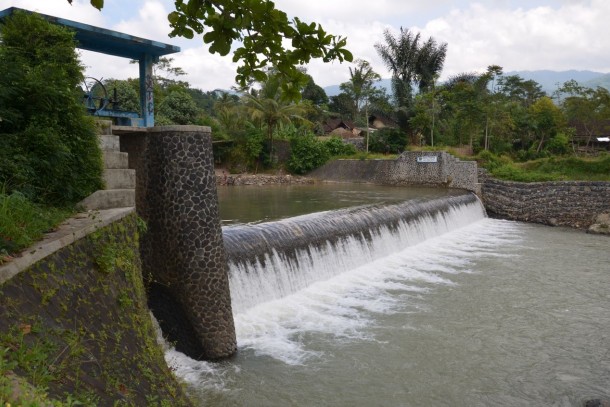 NEFCO has conducted a field trip to visit a project in West Java, Indonesia, currently in the latter stages of construction. The NEFCO Carbon Fund (NeCF) has purchased carbon credits from the project, which meets the criteria of the Clean Development Mechanism (CDM).

The project aims at constructing a small run-of-river hydropower facility, utilising water energy without depleting the source and with minimal impact on the natural environment. The project is developed by P.T. Tirta Gemah Ripah (TGR), a utility company majority owned by West Java provincial government. The company logo proudly proclaims in English that it is a “Trusted Partner for Water Investment”.

The project site is located 10 hours’ drive from the capital Jakarta, in the Garut regency, and approximately 6 hours from the provincial capital Bandung where TGR is headquartered. Driving through lush green valleys, forests, volcanic mountains, tea plantations and rice paddies, it is hard to believe this is the most populous and densely populated of Indonesia’s provinces. Yet the 45 million people of West Java are hungry for power, and the Indonesian government is keen to promote renewable energy in a province where small hydro potential (defined as < 10 megawatt installed capacity) is estimated at up to 200 MW.

Nestled between the ubiquitous rice paddies – in colonial times the mainstay of the local economy – and located alongside an irrigation scheme on the River Circompang from the 1980s, the project site is nearing completion. Most of the civil engineering work is completed, the sand trap and head pond is completed and the 1 km long water channel is 70% built. Due to heavy rains the bulk of construction has to take place in the morning and early afternoon. The powerhouse, currently only one third finished, will eventually house four 2MW Pelton turbines manufactured in India. When complete, these turbines will generate around 47 gigawatt hours of power annually, which will be transferred by a 20kV transmission line to the local grid located only 350 metres away.

The main project benefit is of course clean energy, which will bring about emission reductions of over 33,000 tonnes of carbon dioxide equivalents annually compared to the baseline of fossil fuelled power from the grid. These savings will be procured by NEFCO on behalf of its investors in the NeCF for the next 7 years. However, the project also avoids local air pollution compared to coal fired power including emissions of sulphur and nitrogen oxides and other particulate matter injurious to health. The project supports social infrastructure in a region with a similar Human Development Index as Guatemala, attracting capital investment and generating new jobs, both unskilled and skilled during the construction and operational phases.

The Construction Manager states that most of the labour is drawn from the local Sundanese community (West Java is the heartland of the Sundanese people), and their two year presence during construction has provided a boost to the local economy. When the bulldozers have gone and the turbines have been commissioned, TGR will continue to employ 15 technical, operational and administrative staff at the site.

“We are impressed by the professionalism of the site works and project organisation. Health and safety concerns have been addressed, staff and contractors are well briefed in the latest project management techniques”, says Vice President Ash Sharma from NEFCO.