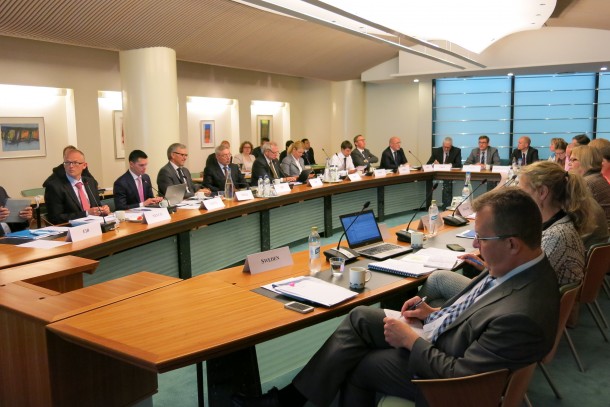 NEFCO has been chairing the Steering Group of the Northern Dimension Environmental Partnership (NDEP) since 1 July last year and hosted the NDEP Steering Group meeting in Helsinki on 25 June.

“The projects within the NDEP co-operation have led to significant reduction of pollution to the Baltic Sea. Despite existing challenges NDEP will continue to improve the environment for the benefit to the people around the sea,” says Magnus Rystedt, Managing Director at NEFCO and Chairperson of the NDEP Steering Group 2014-2015.

The European Bank for Reconstruction and Development (EBRD) will take over the chairmanship from 1 July. During the coming year, the project pipeline in Belarus is expected to expand.

NEFCO signed a framework agreement with Belarus in January which will enable NEFCO to fund municipal projects in the country, with possible projects currently being identified. A pre-feasibility study funded by the Baltic Sea Action Plan Fund identified 11 projects in Belarus in need of funding. These are all in the Baltic Sea Catchment Area and include both renovation of municipal wastewater treatment plants as well as modernisation of industrial locations and treatment of manure. A NEFCO mission to visit five of these municipalities will be carried out shortly with the aim of determining the scope of the feasibility studies.

A new project regarding energy efficiency improvements for the district heating in Minsk was presented for the Steering Group by NEFCO. The project was positively received by the members and a more detailed implementation plan will be discussed at the September meeting.

NDEP currently has 13 active projects under implementation for improving municipal infrastructure in Russia and Belarus, concerning water and wastewater treatment, waste management and energy efficiency. Seven projects are currently under preparation and nine have been completed by June 2015. NEFCO has taken part in 12 of these projects and seven are under implementation. The environmental benefits from these projects have been considerable and the annual reductions of phosphorus account for approximately 2,300 tonnes and the air emission reductions for 355,000 tonnes.

“We have been able to continue working on earlier approved projects, all of which are proceeding well during difficult times and we hope to expand the project portfolio in the coming years,” says Jaakko Henttonen, NDEP Manager.

The NDEP Steering Group is the driving force of the partnership and apart from NEFCO, which became a member in 2008, it includes representatives from the European Bank for Reconstruction and Development (EBRD), the European Investment Bank (EIB), the Nordic Investment Bank (NIB), KfW and the World Bank. Following contributors attended the meeting as observers; the European Commission, Finland, Germany, Norway, the Russian Federation and Sweden. The next Steering Group meeting will be held in Minsk, Belarus on 24 September.