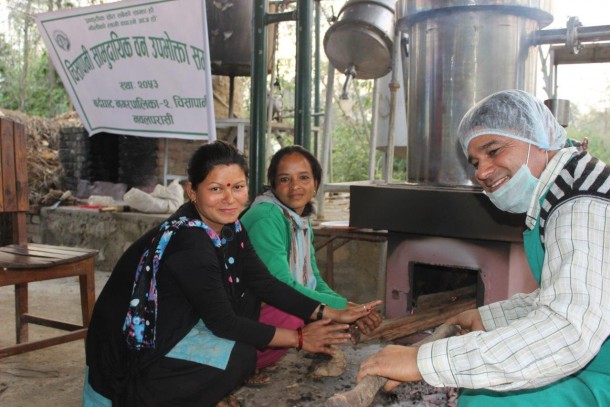 During a joint site visit, NDF and NEFCO acquainted themselves with three different community forest user groups in the Nawalparasi and Chitwan districts in Nepal.

The NCF project is working with community user forest groups to strengthen their ability to adjust to climate change while developing means of alternative livelihood opportunities. High-value non-timber forest products are being grown for restoration purposes as well as for income-generating purposes.

“Women standing up and voicing their opinions was very rare before the project. Now they are, however, actively participating in the community forest user group meetings, which shows that the project has helped to empower these women both financially as well as socially,” explains Emeli Möller, Country Program Manager at NDF.

Several spin-off projects involving the women have developed from the NCF project. In the Padampur community, the women have received training in the production of biochar briquettes from forest waste. Biochar briquettes can be used for cooking and produce less smoke than traditional cooking, thus providing positive health benefits. The briquettes can either be used by the women themselves or sold to Kathmandu where there is a high demand, further increasing the income generation possibilities. In addition, a homestay programme has been successfully piloted and this was something that the Padampur women’s cooperative wished to further explore. Both of these activities were facilitated by Wildlife Conservation Nepal, which also facilitated the site visits as the local project partner.

The Nordic Climate Facility is funded by the Nordic Development Fund (NDF) and administered by NEFCO. The Facility provides grants up to EUR 500,000 per project to Nordic institutions, organisations, companies and authorities in partnership with local organisations for climate-related projects in low-income countries in Africa, Asia and Latin America.

Read more about the project