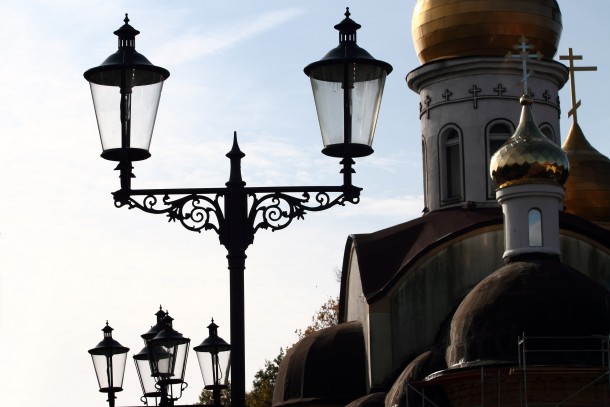 The road to Gurievsk (formerly Neuhausen) in Russia is flanked by long rows of white-washed tree trunks and barren tree tops. Similar park lanes planted during the German era are typical for countless main roads in the Kaliningrad Province.

A town with a population of 12,000, Gurievsk is a mere 10 kilometres away from Kaliningrad centre. The rural environment and reasonable distance to Kaliningrad have encouraged a lot of families with children and commuters to settle down in the community.

Recently, the town of Gurievsk joined forces with NEFCO to upgrade the street lighting system. The idea of the pilot project is to replace the existing obsolete street lamps with low-energy LED lights, which is expected to reduce electricity consumption by 270,000 kWh per year. In economic terms, this means an annual saving of 1,267,000 roubles. The money will be used, among other things, to build and extend the infrastructure in new residential districts.

At the same time, the project yields an added bonus in the form of environmental benefits. Reduced energy consumption will decrease sulphur and carbon emissions by about 122 tonnes per year. On top of everything else, the municipality will be able to remove environmentally-hazardous mercury from the old lamps at the end of their service life.

Preparations for the project are already under way when we arrive in Gurievsk for a meeting with the municipal decision makers. Competitive bidding for the purchase of new lamps was already finished and the contract had been awarded to the Intecco Group, based in the Moscow region. The company has delivered the new street lights in November and is scheduled to complete the installation by the end of the year.

“We recently assumed ownership of the street lighting from the Gurievsk District Administration. Because this part of the infrastructure eats up a lot of energy, we came soon to the conclusion that the obsolete lamps should be replaced. We were quick to pick up on NEFCO’s offer to upgrade the street lighting and cut down our energy consumption,” says Yury Rudi, First Deputy Head of Gurievsk Municipality Administration.

“An important part of our municipal energy programme relates to heat generation in the municipality. We’ll invest in an extensive modernisation of several heating plants and boilers in order to reduce the cost of municipality-owned properties,” says Yury Rudi.

Aside from this, plans are in place to upgrade the municipal water supply system. Automation of the municipality-owned water pumps could control water supply, using less energy and reducing the consumption of drinking water. But Rudi underlines that the order of priority for the contemplated investments will be dictated by current cost levels. After all, it is the heating of properties that swallows the most money. Therefore the municipality’s next energy project will address heat generation.

Strong will to promote energy efficiency in the district

“We hope to be able to fund a major part of these investments with the assistance of external financiers. We’re looking to secure economic support from the federal and regional authorities primarily, and secondarily apply to international financial institutions for loans,” says Olga Trachkovskaya, Deputy Head of Gurievsk Municipality Administration.

“We’re interested in supporting similar investments in a range of municipalities in the Gurievsk District,” says Ludmila Ivochinka.

Gurievsk expects to finance around 15 per cent of the costs of the planned projects with local tax revenues. In the instance of the NEFCO-funded project to upgrade street lighting, the municipality will take a loan of 5.4 million roubles from NEFCO’s Facility for Energy Saving Credits, which will be due for repayment in four years. The loan covers 90 per cent of the cost of the investment.

Modernisation of the street lighting in Gurievsk arouses no strong emotions among the local residents, whereas the plan to increase efficiency in heat supply is a sensitive issue that calls for political backing because the municipality currently subsidises the price of heat by around 20 per cent.

“Because of the high cost of the investment in heat production we’re compelled to raise the tariffs and this will no doubt stir up strong reactions as the increased prices will be felt in everybody’s pocketbooks,” says Yury Rudi.

For a retired person, the heating bill in winter may account for up to 40 per cent of the monthly income and so a potential increase in price will have an emotional impact. But without higher tariffs it is difficult to come up with the funding required from the municipality for these important projects. And without local municipal financing it is hard to obtain loan capital from international financial institutions. But as long as much of the heat goes to waste, everybody loses.

“Those with a low income can always receive financial support from the municipality to pay the higher tariffs. And once the energy projects have been completed, we’ll be able to offer cost-effective heat to local residents. The savings achieved by the municipality will also make more money available for social services to distribute to those who find it hard to make ends meet,” Rudi points out.