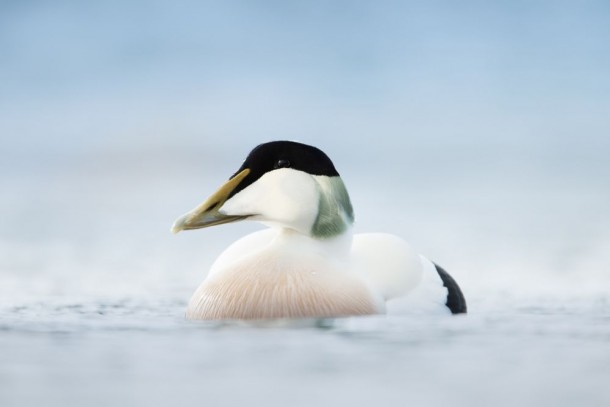 The Arctic Council Project Support Instrument (PSI), administered by NEFCO, has approved a project aimed at improving the conservation of declining Arctic migratory bird populations that use the Circumpolar Flyway. The project will focus on mitigation of habitat degradation and, in particular, study the effects of plastic pollution on Arctic seabirds.

Increasing concentrations of macro- and micro-plastics have been found in the Arctic waters and sea ice, but the impacts on the food chain and, in particular, on birds have not yet been widely studied.

The Conservation of Arctic Flora and Fauna (CAFF’s) Arctic Migratory Birds Initiative (AMBI) works to address specific threats to Arctic-breeding migratory birds. In the Circumpolar Flyway seabird species, such as Thick-billed murre, Common eider, Steller’s Eider and Ivory gull, which spend most of their life cycle in the Arctic region and migrate east-west rather than north-south are a key focus area.

“Seabirds in the Arctic face many challenges. AMBI is working to understand these issues better, and with this support from the PSI we’re now able to develop projects under the Arctic Council that help scientists and policy makers, better understand how to respond to the issue of plastics pollution,” says Evgeny Syroechkovskiy, Russian Federation Chair of the Arctic Migratory Birds Initiative (AMBI).

Seabirds can indicate the health of the oceans, lands, coasts and freshwater systems in the Arctic and around the world. Their rapid decline is an alarming concern and reflects the disappearance of many ecosystems, not only for the seabird and sea duck species, but also for people across the planet.

The approved project will aim to scale up existing work in AMBI’s Circumpolar Flyway, and result in a monitoring programme for Pan-Arctic plastic pollution in seabirds.

“This initiative with PSI is a great example of how we can work together to scale up activities and have on-the-ground impacts to address biodiversity conservation and pollution issues across the Arctic and beyond”, says Tom Barry, CAFF Executive Secretary.

The PSI grant of EUR 100,000, will finance technical assistance and consultancy services within the project. NEFCO is currently also supporting ongoing work in the East Asian-Australasian Flyway, which is the most threatened flyway, as well as the African-Eurasian Flyway.

“It is very important to map the current situation for the Arctic bird populations, and we are pleased to help implement the AMBI programme by financing these two projects through PSI,” says Henrik G. Forsström, Senior Adviser at NEFCO.

Arctic breeding birds use as many as eight different flyways to migrate from Arctic breeding grounds to overwintering or stopover sites. The Arctic Migratory Birds Initiative (AMBI) has identified four flyways: Americas, Circumpolar, East-Asian and Australasian. Furthermore, AMBI has identified actions that will be undertaken over a four-year period between 2015 and 2019 to protect Arctic lifestyles and peoples through migratory bird conservation. The aim is to improve the conservation status and secure the long-term sustainability of declining Arctic migratory bird populations. The initiative is an important mechanism for strengthening the cooperation between the Arctic nations and the Arctic Council Observer states.

About Conservation of Arctic Flora and Fauna (CAFF)

The Arctic Council Project Support Instrument (PSI) is a funding mechanism managed by NEFCO. The instrument is intended to finance environmental initiatives aimed at preventing and mitigating pollution of the Arctic Region. PSI funding is available to projects proposed by all of the Arctic Council’s working groups, once they have been approved by the Arctic Council. The current contributions to PSI funds in the form of deposits, pledges and indications stand at EUR 12.9 million. Since 2014, the PSI’s governing body, the PSI Committee, has approved or expressed interest in 15 environmental Arctic Council project proposals