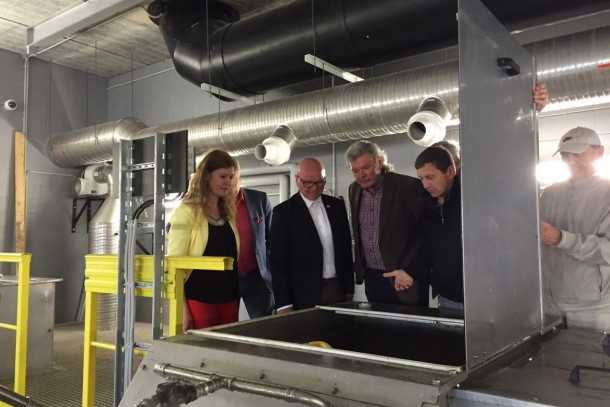 An upgraded wastewater treatment plant in Jõelähtme, a parish of approx. 6,000 inhabitants which lies to the northeast of the Estonian capital of Tallinn, was inaugurated by the public utility company AS Viimsi Vesi on Thursday, 16 June. Located close to Muuga, which is home to one of the busiest ports in the Gulf of Finland, the plant is capable of treating over 1.54 million cubic metres of wastewater annually. Over 24,000 people residing in the parishes of Viimsi and Jõelähtme will benefit from the investment.

The BSAP Fund provides grants for project preparation, technical assistance and for the implementation of projects that support the action plan. A key purpose of the Fund is to facilitate and speed up the preparation of bankable projects. The initial capital for the BSAP Fund, totalling EUR 11 million, was contributed by the governments of Sweden and Finland. The Swedish Agency for Marine and Water Management replenished the Baltic Sea Action Plan Fund with SEK 12 million (approx. EUR 1.3 million) in December last year.

The BSAP Fund provided EUR 170,000 to As Viimsi Vesi for the necessary document preparation and project design that enabled the company to initiate the procurement process for the upgrade of the wastewater treatment plant in Muuga. The document preparation also secured the financing for the project from the EU Cohesion Fund. Over 70 kilometres of water distribution pipes and a range of pumping stations were upgraded as a result of the project. The investment by AS Viimsi Vesi will contribute to reduced discharges of phosphorus and nitrogen to the Baltic Sea.

“This is money really well spent considering the environmental benefits for the Baltic Sea. Without support from the BSAP Fund and the EU Cohesion Fund, it would have taken Viimsi Vesi much longer to upgrade the wastewater treatment plant,” said Communications Manager Mikael Sjövall from NEFCO while visiting Jõelähtme.