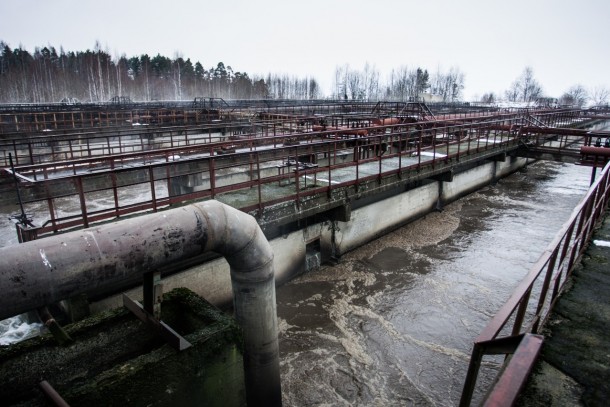 The wastewater treatment plant in Petrozavodsk, the capital of Russian Karelia, was inaugurated today. The plant has been upgraded to reduce discharges to Lake Onega and the Baltic Sea and thus improve the quality of the drinking water in the region. The plant cleans some 145,000 cubic metres of sewage water per day for the city’s 270,000 inhabitants.

“We are very content to see that all the stages of the reconstruction have been successfully implemented at the wastewater treatment plant, and that the discharges of phosphorus will decrease dramatically,” said NEFCO’s Executive Vice President Kari Homanen in Petrozavodsk today.

Local, regional and national representatives as well as representatives of the international donors took part in today’s ceremonies in Petrozavodsk, marking a historical moment for the city.

The project has covered rehabilitation and extension of the drinking water plant, including the construction of a recycling unit for sludge, full rehabilitation of the wastewater treatment process and implementation of a biochemical treatment process to improve phosphorous removal. With the implemented measures, the drinking water quality has improved dramatically since 2016, and the new wastewater treatment process will reduce phosphorus discharges by 75 tonnes per year to Lake Onega. After completion, the plant will fulfil the Baltic Marine Environment Protection Commission’s (HELCOM) requirements regarding nitrogen and phosphorus removal from the wastewater. Petrozavodsk lies on the shore of Lake Onega, which is part of the Baltic Sea catchment area.

The financing of the reconstruction has been co-ordinated by NEFCO, which has contributed a loan of EUR 4 million for the modernisation of the plant. The Nordic Investment Bank (NIB) has contributed a EUR 7 million loan, while the Northern Dimension Environmental Partnership (NDEP) has provided a grant of EUR 5 million to purchase equipment, and the Ministry of the Environment of Finland has provided a EUR 2 million grant for the reconstruction. In addition, technical assistance grants, some EUR 2 million, from Sweden (Sida) and Finland have been used to finance the engineering designs and project supervision. Other financial contributors include the Russian Federation, the Republic of Karelia and the City of Petrozavodsk as well as the private local operator of the facilities, Petrozavodsk Utilities Systems (PKS). The total investment in the reconstruction amounts to EUR 34.7 million.

“The NDEP donors are pleased to see that the investment has been completed and that the level of wastewater treatment is now in compliance with the applicable Russian, EU and HELCOM standards. This is a great result for the local population and all the neighbouring countries,” says Managing Director Alistair Clark at the European Bank for Reconstruction and Development (EBRD).

Petrozavodsk’s low drinking water quality and the inadequate sewage treatment system were identified by the Barents Euro-Arctic Council (BEAC) in 2003 as two of the 42 environmental ‘hot spots’ in the Barents region. Petrozavodsk, however, was already excluded from the List of Hot Spots for its drinking water issues a few years back. Following the successful rehabilitation of the wastewater treatment plant, the foundation is laid for excluding Petrozavodsk from the List also for its wastewater issues.

NDEP is a multi-donor fund managed by the EBRD, which pools contributions from the European Union, Russia, Belarus, Belgium, Canada, France, Finland, Denmark, Germany, Netherlands, Norway, Sweden and the United Kingdom to be used as grants to improve the environment in the Baltic and Barents Seas region.