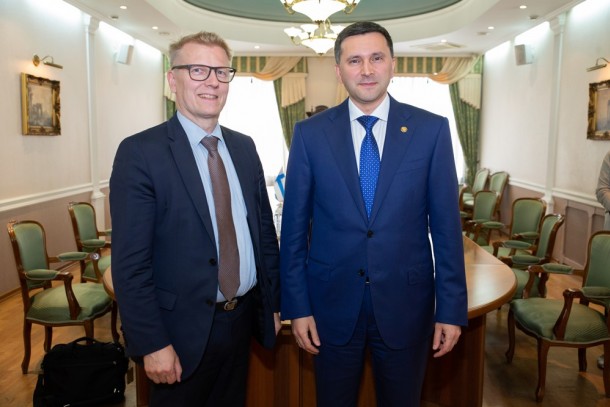 Important progress has been made to clean-up the Krasny Bor waste site due to good cooperation between Finland and Russia as well as by involving an international network under NEFCO’s coordination. This was concluded at a meeting in Moscow on 11 July, when the Finnish Minister of the Environment, Energy and Housing Kimmo Tiilikainen met with Dmitry Kobylkin, Minister of Natural Resources and Environment of the Russian Federation to discuss bilateral cooperation.

“As we continue the work on the clean-up of the Krasny Bor waste site we are also currently financing initiatives to reduce Short-Lived Climate Pollutants, including black carbon emissions in the Russian Arctic as well as looking into new initiatives in the republic of Karelia”, Managing Director Magnus Rystedt informed in Moscow.

HELCOM’s Pressure Group assigned NEFCO, in 2016, to coordinate the international technical assistance to clean-up the site. In 2017, NEFCO signed a Memorandum of Understanding with the Ministry of Natural Resources and Environment of the Russian Federation, as well as with the Committee for Nature Use, Environmental Protection and Ecological Safety of St Petersburg and the Polygon Krasny Bor.

With financial support from Finland and Sweden, NEFCO engaged consultants from Fortum as well as Ramboll at the end of 2017 to take samples and prepare a proposal for treating the wastewater at the lagoons. Germany is also providing financial support to the international efforts at Krasny Bor. The German Ministry for the Environment has engaged the German consulting firm GFI Groundwater to conduct a study on the development of the monitoring system at the landfill and its vicinity.

During the ministerial meeting in Moscow the participants discussed further steps regarding the possibilities to realise an environmentally and financially feasible set of measures to prevent the lagoons from leaking and closing down the site by 2024.

The Krasny Bor waste disposal site was originally built for the reception, disposal and burial of toxic industrial waste from the St Petersburg and Leningrad region. In the early 1990s, HELCOM listed the site as a Hot Spot due to the environmental risks of toxic chemicals leaching into the surrounding areas and the Baltic Sea. The site has been closed since the beginning of 2014, but prior to that it had received at least 1.7 million tonnes of waste in all forms over the years.