BNB-Bank sets the wheels in motion 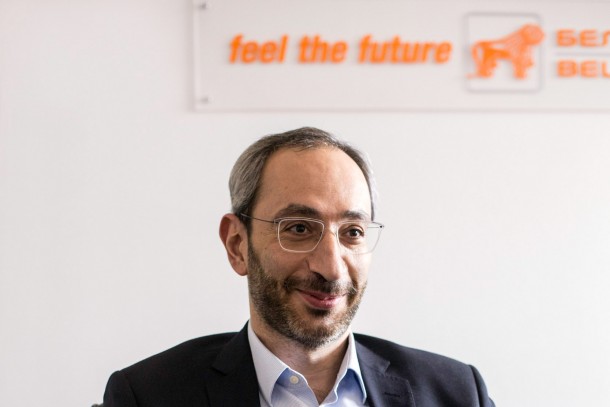 The Belarusky Narodny Bank (BNB-Bank) head offices in Minsk have had a fresh facelift. The newly-renovated building is wedged between grey high-rise blocks around a neat courtyard, a stone’s throw from Kalinin square next to one of the city’s main streets.

The bank is harsh on the eye with its garish orange colour theme. All its signs, publications and fluttering flags at the entrance have a splash of or- ange. To be seen is to be heard. And judging by BNB-Bank’s reputation, the bank is relatively well-known in the capital city, despite its business being still rather small scale. “In 2013 we were ranked as Belarus’ most dynamic bank, by an independent classification organisation,” says the bank CEO Constantine Tseretel, proudly.

The CEO meets us wearing a dark, well-tailored suit without a tie, and comes across as informal as he shows us the details of the bank’s key figures. Last year’s loans amounted to a total of USD 146 million, which places BNB-Bank in thirteenth place in the country’s banking sector in terms of the lending volumes. BNB-Bank currently has over twelve branches, and has more than 400 employees throughout Belarus. The main clientele are small and medium-size businesses plus well-off private individuals. The bank’s financial backbone is supported by the influential financiers Bank of Georgia and the International Finance Corporation (IFC), which together own 99.98% of the shares in BNB-Bank. Bank of Georgia is itself a key player in its own territory of Georgia, where the bank’s total assets amount to an impressive USD 3.4 billion.

In 2013, NEFCO and BNB-Bank founded a joint fund to promote green, environmentally-friendly investments in the transport sector. NEFCO granted a loan of EUR 1.5 million to the joint fund, which lends capital to companies interested in modernising their machinery and equipment, and purchasing new fuel-efficient lorries. Belarus is a transit country for international freight of goods and foodstuffs, which means that the transport sector and goods traffic have significant standing in the country.

“Up to now, we have granted 16 loans for these kinds of projects, but we hope to be able to sign more similar loans this year. The macro-economic crisis last year did have a negative effect on the influx of project queries and loan applications, including for this type of investment,” says Tsereteli.

However, thanks to rigorous risk management and long-term planning, BNB-Bank
successfully managed to ride out the worst of the storms during the financial crisis. A replenishment of financing to the tune of USD 18 million from the syndicated loan facilities arranged by EBRD and IFC also contributed to the bank’s economic stability. “Our net income reached record levels in December 2014 and January 2015, which indicates that we clearly did something right,” says Tsereteli with a wide grin.

Our interview in the bank’s meeting room is coming to an end, and it will soon be time to research fuel-efficient lorries. Leading Specialist Katsiaryna Stain takes us to the outskirts of the city to meet with the bank’s clients. Stain is responsible for the bank’s international relations, and, like Constantine Tsereteli, speaks fluent English. The car journey takes us through bustling busy streets and ring roads, to a petrol station where OOO Progsib’s CEO Aleksandr Aleksievich meets us for a quick chat. He poses willingly in the lorry’s cab and looks confidently into the camera. OOO Progsib has specialised in the transport of
dairy products from Belarus to the Russian market. Progsib’s lorries are loaded with cheese, milk and cream cheese products, so it must be ensured that the cold chain is in order.

“We collaborate with two dairies in Belarus and one in Russia. The financial downturn in Russia has unfortunately reduced demand of the products we transport, which has also impacted on our income,” Aleksievich explains. “Under the circumstances, it is therefore necessary to review the company’s fixed costs, and reduced fuel costs can be one way of improving profitability.”

OOO Progsib has replaced two of its fourteen lorries thanks to a loan from BNB-Bank. A more comprehensive upgrade of the company’s vehicles is expected in future. The company estimates replacing one or two lorries each year, or as long as the capital flow permits. It costs specifically around EUR 86,000 to purchase a new lorry of the same size used by the company.

“Our lorries use an average of 28-32 litres of fuel per 100 kilometres. Thanks to our move to more modern and fuel-efficient vehicles, we have successfully squeezed our annual consumption down by around 15%,” Aleksievich concludes.

NEFCO’s collaboration with BNB-Bank is just one link in the systematic work to increase contact networks and loans to commercial banks. There are similar set-ups, for example in Ukraine where NEFCO has created joint funds with Megabank and Bank Lviv to promote investments in energy efficiency. As a best case scenario, the good experiences with BNB-Bank’s loans in Belarus will also set the wheels in motion for Georgia.

“We are currently discussing with Bank of Georgia on the opportunity to create an equivalent fund which could lend capital to Georgian environmental investments, including the transport sector,” explains NEFCO’s Senior Financial Manager Thor Thorsteinsson.