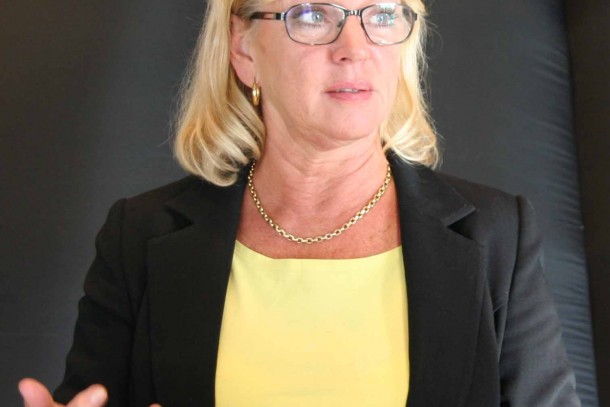 Seasoned Swedish diplomat Gabriella Lindholm’s formidable diplomatic skills will be valuable for HELCOM chairmanship as she aims to bring polluted Baltic beaches back to their natural scenery.

NEFCO met with Gabriella Lindholm at the International World Water Week in Stockholm, where she is scheduled to participate in a panel discussion on the ecological state of the Baltic Sea arranged by the Nordic Investment Bank (NIB) and NEFCO. With 30 years of experience as a diplomat behind her, Ms Lindholm is used to negotiation, mediation and compromise – valuable diplomatic skills, which she needs in her new job as an Ambassador for the marine environment at the Swedish Ministry of Environment.

Lindholm’s formidable diplomatic skills will be sorely needed in her new position as the chairperson for the Baltic Marine Environment Protection Commission or HELCOM during the Swedish chairmanship of the organization.

“My passion and commitment to the Baltic Sea have developed over the years. As a child I remember algae-free, sunny, summer days spent on the eastern coast of Sweden. Today the situation is different. Eutrophication and toxic algae have increased, and turned Baltic beaches to health hazards“, Ms Lindholm laments.

One of Ms Lindholm’s key tasks will be to coordinate the work of the Baltic Sea Action Plan (BSAP), which was launched in Krakow, Poland, in 2007 and is aimed at reducing pollution and restoring the ecological balance of the Baltic Sea by 2021. The plan has, among other things, set concrete national targets for countries bordering the Baltic Sea to reduce discharges of phosphorus and nitrogen. To achieve these targets, coastal countries must develop national implementation plans on pollution reduction measures. The work has, however, proceeded so slowly that many independent observers have described HELCOM’s summit in Moscow last May as a failure. Ms Lindholm is optimistic.

Ms Lindholm does not see any conflict between the Baltic Sea Action Plan and the EU marine directive, and the fact that a few coastal states have announced that they will give priority to EU marine regulations at the expense of HELCOM’s decisions.

”In my opinion, the EU directives and BSAP activities complement rather than compete with each other, and I understand the position of member countries with budgetary constrains, which are forced to give priority to the legally binding EU marine directive, ,” she says.

In order to speed up the implementation of the BSAP, the Swedish chairmanship has offered human and financial resources to the HELCOM Secretariat in order to build up its organizational capacity, a process that will increase the organization’s influence within the EU.

Lindholm believes that high-level summits such as the Baltic Sea Action Summit, which was held in Helsinki in January, have the capacity to mobilise regional initiatives. During the summit, for example, Russian premier, Vladimir Putin, was able to commit his country to many initiatives to rehabilitate the Baltic Sea. The next high-level meeting arranged by HELCOM will be held in Stockholm next year.

”Cross-sector cooperation is quite crucial in this work. There is, for instance, a great need to coordinate the operations of, say, the fishing, agricultural and industrial sectors. And HELCOM needs to maintain close cooperation with the scientific community in order to preserve its credibility as an expert organisation,” Ms Lindholm maintains.