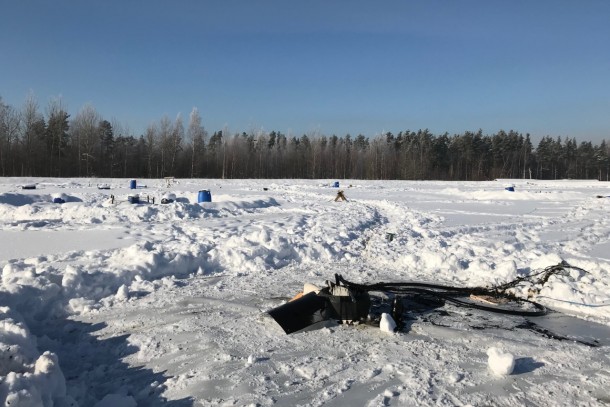 The Finnish company Fortum Environmental construction has started the sample taking at the Krasny Bor landfill. Fortum is taking samples from the open lagoons at the landfill this week, which will then be transported to the laboratory in Riihimäki, Finland, for analysis. The lagoons are currently at acute pollution risk, and the laboratory studies of the samples will help in drawing up a preliminary design for the possible treatment methods for the hazardous waste at the landfill. Fortum’s work is financed by the Baltic Sea Action Plan Fund, which is administered by NEFCO and the Nordic Investment Bank and financed by Finland and Sweden.

NEFCO was asked by HELCOM in autumn 2016 to co-ordinate the work and the international financing to improve the environmental safety of the Krasny Bor waste site, which has been closed since the beginning of 2014. Last autumn, NEFCO signed a Memorandum of Understanding with the Russian Ministry of Natural Resources and Environment; the Committee for Nature Use, Environmental Protection and Ecological Safety of St Petersburg; and the State Unitary Environment-Protection Enterprise “Polygon “Krasny Bor” for remediation of the landfill.

“The Baltic Sea is one of our main focus areas, and since NEFCO’s establishment in 1990 we have been focusing on contributing to the decrease of phosphorus and nitrogen discharges by financing wastewater treatment and agricultural projects in the Baltic Sea Region,” said NEFCO’s Executive Vice President Trond Moe at Krasny Bor today.

With financial support from Finland and Sweden, NEFCO engaged consultants from Fortum as well as Ramboll at the end of 2017. Germany is also financially supporting the international efforts at Krasny Bor under NEFCO’s coordination. The German Ministry for the Environment has engaged the German consulting firm GFI Groundwater to conduct a study on the development of the monitoring system at the landfill.

Krasny Bor was listed as a Hot Spot by HELCOM in the early 1990s for its inadequate handling of hazardous wastes and associated environmental risks of toxic chemicals leaching into the Baltic Sea. The landfill was originally founded in the late 1960s to manage hazardous waste from the St Petersburg and Leningrad Region due to heavy industrialisation at that time. Over the years, the landfill has received hazardous waste in all forms, and it is estimated that at least 1.7 million tonnes of waste have been taken to the waste site.