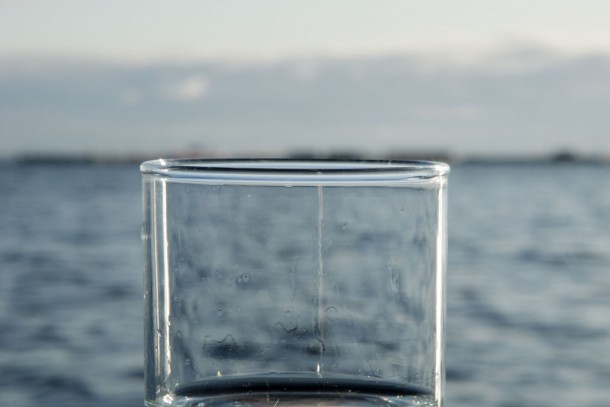 Otto Wille Kuusinen, the Finnish-born foreign-policy advisor to Vladimir Lenin, gazes across Lake Onega in Petrozavodsk as we approach the city hall in an autumn storm. A lot of water has flown into the city’s sewers since the Soviet monument to Kuusinen was erected.

Today Petrozavodsk, the capital of Karelia, is an affluent city with trendy cafés, popular theatres and new blocks of flats in the city centre. Rippling water is never far away. Toward the east, Lake Onega offers beautiful vistas from the city, and next to the marina, River Svir flows into the lake, feeding it with humus and nutrient salts. Local families stroll by the water. Lake Onega glimmers beautifully in the dusk, but under the surface there is trouble brewing.

Some ten per cent of the city’s inhabitants are still not connected to the water network. And wastewater discharged in to the lake contains so much phosphorus that it causes eutrophication. Because of this, the Petrozavodsk Utilities Systems (PKS), which manages a large part of the city’s infrastructure, is looking for opportunities to upgrade both the water supply system and treatment of sewage.

“Our company treats around 145,000 cubic metres of sewage every day. We are planning to implement chemical phosphorus removal, improvements to the filtering of drinking water and upgrades to sludge treatment to meet international recommendations,” says Alexander Safranov, the Managing Director of PKS.

The insufficient sewage treatment system of Petrozavodsk has been identified as one of the 42 environmental ‘hot spots’ in the Barents region. Because Lake Onega is part of the Baltic Sea’s catchment area, the Baltic Marine Environment Protection Commission HELCOM is also keen on promoting the improved treatment of the city’s sewage.

NEFCO is currently discussing with the Nordic Investment Bank, the Northern Dimension Environmental Partnership (NDEP) and PKS on the financing of the project. The total costs are expected to come to EUR 28 million. One of the project’s goals is to reduce phosphorus content to 0.5 ml per litre of sewage to meet HELCOM’s recommendations. That would mean an annual reduction in phosphorus discharge of around 75 tonnes. And it would provide the local population with crystal clear bath water.